In case you are interested in getting in contact we would be happy if you add the following information to your profile: profile picture, , , origen, languages. Please use edit link above. 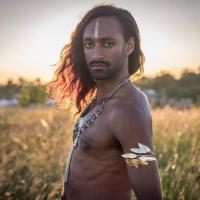 Qualification Private tuition Co-creator H healer / facilitator I have co-created retreats and had long residencies as a Practitioner and Facilitator in various Conscious Communities around the world, as a Sacred Sexual Awakener. Here are some of the retreat centres, urban spaces, yoga studios and events where I have worked. Residency & Weekly Drop-in Classes: Retreats: Practitioner/Facilitator: If you’re wondering how a man who massages yonis came to be known as Shaft, here’s the story. My birth name is Shofiqul Islam Uddin. I was born into a devout Bangladeshi Muslim household; very strict and sexually repressed. Being someone who loves touch, playfulness, making love and feeling joy, I felt hugely restricted and broke free early on. I faced a lot of opposition and inner turmoil, sowing the seeds for two decades of self-destructive behaviour. It seemed clear to me that I was born to expand people’s understanding and show them that anything is possible. During my wild youth, I discovered break-dancing, becoming professional in the early 2000s. Since my birth name was a bit of a mouthful and my dance style was very 70s, I was nicknamed Shaft (after the film and famous Isaac Hayes track) and it’s stuck ever since. As a young adult, my life was one of hedonism and excess. I went from being the son of a working-class immigrant, to being a super-successful Art Director in advertising, working for some of the biggest brands on the planet; A classic rags-to-riches story. And yet, I was living a double life. My crazy life-style was fuelled by alcohol and drug addiction. I was the picture of success, but beneath the surface I suffered from repeated broken relationships, depression and self-hatred. It wasn’t until I’d had several near-death experiences and alienated most of my friends, that I realised things had to change. Intuitively, I turned to alternative therapies, meditation, plant medicines and tantra. In under two years, was free of my addictions and had learned the power of self-love. I swapped addiction for passion; passion for heart-based tantra, passion for knowledge and passion for sharing my innate joy, which is now aligned with my sex, heart and purpose. Along the way, I have been blessed to encounter many beautiful lovers and (mostly female) teachers, all of whom have accelerated my spiritual growth and accompanied me in my shift from craving sex to making beautiful love. My own personal healing and learning has taught me how to connect with the Divine, unite my inner masculine and feminine, embody the pure presence of Shiva, so as to evoke Shakti in the other, and the incredible power of channelling sexual energy with intention. The transformation and magic that I have seen manifested in my own life, as well as that of my clients, has been profound and humbling. It was during my ISTA training in Hawaii, laying inside a lava cave shaped like a giant yoni, that my life purpose became clear. As I surrendered to Source in a shamanic ritual, I received my Calling to serve the Goddess and become a bridge for men and women to learn the mysteries of each other. Only then may we clear the blame and misunderstanding of patriarchy and co-create a new era of divine union and unconditional love. I AM A CONDUIT FOR AWAKENING THE GODDESS WITHIN YOU. Where once my internal monologue was one of self-hatred, my daily mantra is now: “HOW CAN I SERVE” I wish to thank and honour all of my many teachers named and un-named, including Barbara Carrellas, Betty Martin, Jan Day, Beverliy Lalyta Kaliah Devi, Drew Lawson, Robert Silber, Kelly Bryson, Jelena Mitra and Kamala Devi McClure.
X